Safe, affordable housing is out of reach for far too many people around the world

Every day, more families find themselves in a struggle to keep a decent roof over their heads. Caught in cycles of unpredictable rent increases, overcrowded conditions, or lack of access to land and affordable financing, these families live with a constant burden of stress and fear.

Helping families leave that cycle behind is why we build. When a family can create a decent place to live that’s affordable, everything can change – and so much change is so desperately needed.

Tremendous housing need around the world

One in 10 people lives on less than $1.90 a day, the international threshold for extreme poverty, according to the World Bank. In 2018, an estimated 8.6%  of the world’s population was living in extreme poverty.

More than 70% of the world’s population lack formal documentation for the land on which they live. Proper documentation gives families a more secure home and greater financial independence.

As more of the world’s population moves from rural areas to cities, low-income families are the first to be evicted and pushed to the edge of cities into unplanned slums.

Overcrowded, substandard housing poses a risk to the health and physical well-being of families and their neighbors and facilitates the spread of infectious diseases, according to the World Health Organization.

The United Nations estimates that the global population will reach 8.5 billion by 2030, with almost 60% of the population living in urban centers. An estimated 3 billion people will need new housing and basic urban infrastructure by 2030.

The difference a decent and affordable place to live can make
The United Nations has found that there is a strong correlation between improved housing and poverty reduction.

How Habitat is making an impact
Habitat for Humanity knows that safe, decent and affordable shelter plays an absolutely critical role in helping struggling families find a new path forward.
Affordable homeownership fosters the skills and confidence they need to invest in themselves and their communities. The outcomes can be long-lasting and life changing. With your support, we have helped more than 29 million people build or improve the place they call home since our founding in 1976.

We work in many ways: new construction, repairs to existing homes, small loans for incremental building and home improvements, help establishing title and ownership to land, advocacy for better laws and systems, market development, and more.

Families partner with us to acquire the access, skills and financial education necessary for them to improve their living conditions and repay an affordable mortgage or loan. In doing so, they seize the opportunity and possibilities that decent, affordable housing represents. 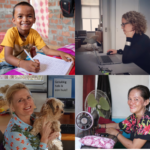 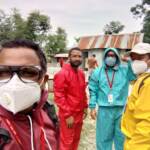